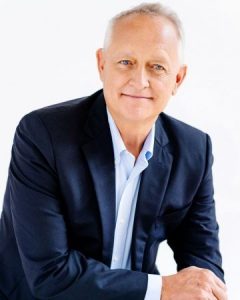 Prosecutor Joe Deters began his legal career in 1982 working as an Assistant Prosecuting Attorney in Hamilton County’s Juvenile, Municipal, and Common Pleas Courts. This is ere he first witnessed the enormous impact crime, particularly violent crime, had on victims, their family, and even their neighborhoods.

In 1988, after six years as an Assistant Prosecutor, Joe was honored to be elected as Clerk of Courts for Hamilton County.  Under Joe’s direction, the Clerk’s office evolved into a computerized and technology-driven operation, greatly increasing its proficiency and providing cost-effective services while saving taxpayer dollars.  This is also where Joe honed his leadership skills as the manager of a large public office, gaining the respect of other officeholders and the community.

Then, in 1992, Joe returned to the Hamilton County Prosecutor’s Office after being appointed and later elected Prosecuting Attorney. Joe quickly garnered a reputation as a tough, no-nonsense prosecutor willing to prosecute tough cases.  Joe’s commitment to victims never wavered and, as Prosecutor, he knew more needed to be done. Within months of taking office, Joe created Hamilton County’s first ever Victim/Witness Advocate Program, giving victims of violent crime and their families the assistance they needed and deserved as they navigated the criminal justice system.

In 1996, Joe was re-elected Prosecuting Attorney where he continued to vigorously pursue his goal of making Hamilton County a safe place to live, work and raise a family.

A few years later in 1999, Joe was sworn in as Ohio’s 44th Treasurer of State where he was responsible for collecting, managing and investing more than $11 billion in assets for the State of Ohio. During his tenure, the Ohio Treasurer’s Office received 23 national awards for innovation and technology and earned interest on investments faster than any previous administration.

As much as he enjoyed being Ohio’s Treasurer, Joe’s love for and commitment to Hamilton County and his family brought him back to Cincinnati in the fall of 2004, where he once again ran for Prosecuting Attorney.  After receiving nearly 60% of the vote, Joe was once again sworn in as Hamilton County Prosecutor on January 2, 2005. He has since been re-elected as Prosecuting Attorney in 2008, 2012, 2016 and 2020.

As Hamilton County Prosecuting Attorney, Joe has been instrumental in many ways to better protect Ohio citizens, including:

Joe believes that criminal justice resources are best spent prosecuting the most violent offenders. That is one reason why he created a Sex Offender Unit in the Prosecutor’s Office.  This unit works closely with the Hamilton County Sheriff’s Department to ensure that sex offenders residing and working in Hamilton County are properly registered and, when they are not, to prosecute those offenders for failing to comply with Ohio law.  They also pursue violations by registered sex offenders for improperly residing to close to a school or day care facility.  Most recently in 2020, Joe created the Crimes of Violence Against Women and Children Unit.  This specialized unit oversees the prosecution of violent crimes against women, children and domestic partners using a “vertical prosecution” or streamlined approach designed to help victims avoid re-traumatization and foster trust during the court process.