In 2007, Liz and David Carroll were convicted for the August 2006 murder of their 3- year-old foster son, Marcus Fiesel. On August 4, 2006, prior to leaving town for a family reunion, the Carrolls bound and wrapped Marcus and locked him in a hot closet in their Clermont County home, without food or water. As they left their home, they could hear Marcus screaming for help.

When they returned home on August 6, Marcus was dead. David Carroll took Marcus’ body to a remote location and burned his remains. That which wouldn’t burn was thrown into the Ohio River.

On August 15, 2006, Liz Carroll reported to police that Marcus had gone missing while playing at a park in Anderson Township. The same day Marcus went missing, David Carroll gave media interviews praying that his foster son would be found.

On August 28, 2006, Hamilton County Prosecutor Joe Deters had law enforcement officers bring Liz Carroll and Amy Baker (the Carroll’s roommate) to testify before the Grand Jury. It is then that Amy Baker told authorities what the Carrolls had done. After being confronted with this information, Liz Carroll confessed.

Liz Carroll was convicted by a Clermont County jury and sentenced to 54 years in prison. Subsequently, David Carroll pleaded guilty and was sentenced to 15-years-to-life in prison.

David Carroll will have his first parole hearing in July of 2022.

Hamilton County Prosecutor Joe Deters commented, “All these years later, I still cannot imagine how two people could do something like this. This sweet boy suffered a brutal death – he died alone, locked in a closet by the very people who were supposed to protect him.

He was shown no compassion by Liz or David Carroll. Now David Carroll will ask the parole board to show compassion to him. But monsters like him should never get out of prison.

We are asking the public to join us in opposing David Carroll’s release by going to our website, www.hcpros.org/david-joseph-carroll/ and submitting a letter to the parole board.”

Clermont County Prosecutor Mark Tekulve commented, “I struggle to imagine the sheer terror suffered by three year old Marcus Fiesel as he was wrapped up, bound with tape, and left to languish alone by his murderers, David and Liz Carroll.

The physical pain Marcus experienced as he slowly died tied up in the closet is unthinkable. For his horrific actions, David Carroll deserves to spend the rest of his life in prison. We owe this to Marcus. 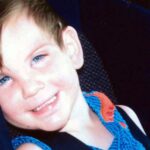